REVIEW: The Wind Up Bird Chronicle by Haruki Murakami 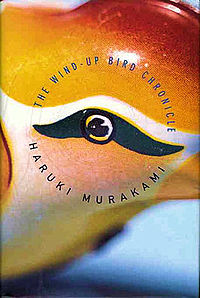 The Wind-Up Bird Chronicle is the second Haruki Murakami book I've read, and while I have mixed feelings about this one, I have a lot of admiration for his writing and still intend to read more of his work. This book was not originally on my Murakami radar, but I decided to read it when Ti at Book Chatter decided to host a Wind-Up Bird read along. I pretty much missed the group aspect of the read-along, but at least I read it. I finished reading this back in May at which time I wrote most of this post. I finally revisited it yesterday and finalized my thoughts.

I've labeled this post as a review, but it's more of a collection of my thoughts on the book. I guess I'm reluctant to say with confidence that this write up is a review because I honestly don't feel qualified to react to it objectively or to even accurately describe the book's premise! It's so unlike anything I've read before -- an ambitious piece of literature that I sometimes felt challenged to comprehend.

My very simplified plot description of The Wind-Up Bird Chronicle (which takes place in modern day Japan, if you didn't already know) is this: A man named Toru Okada lives a simple life with his wife of six years, Kumiko, and their cat. Toru is recently unemployed and not really sure what he wants to do about it. Their cat goes missing and Kumiko implores Toru to find him. On his search for the cat, he befriends a teenage girl in their neighborhood and a lonely old World War II Lieutenant who is haunted by his past, consults with an unusual medium about the whereabouts of the cat and then his wife unexpectedly disappears. Toru's search efforts shift from the cat to that of Kumiko and soon a string of strange events occur that even he doesn't understand, spiraling his life in very bizarre and surreal directions. He spends a lot of time contemplating these events and his life in general at the bottom of a dry well.

If I had to name one major theme of this book, I would say it is a study in fate versus free will or perhaps more accurately, the melding of the two philosophies. How absolute is fate? and how powerful is man's free will that he can thwart fate and carve his own path through life? Murakami explores this quite elaborately and in a fairly abstract way that was often difficult for me to piece together.

The Wind-Up Bird is a book you could talk on and on about but still never fully articulate exactly what it's really about, what it all means or how it made you feel. To quote Toru Okada himself, I frequently asked this book to just "name something already. Name something concrete." Toru was always wanting a concrete explanation--something tangible that he could relate to or hang on to so he could understand what someone was talking about. I felt like that a lot myself while reading this book!

Murakami's characters live in reality as we know it, their imaginations AND in some "other version of reality." An "other" place in which they interact with each other in a very surreal way. The word 'phantasmagorical' is probably the best singular descriptor of The Wind-Up Bird Chronicle (I've always wanted to use that word). 'Perplexingly phantasmagorical' if I were to use two words.

I'm very glad I read the book--it's a fascinating, albeit often slightly nightmarish journey of an ordinary man. The writing is excellent and is nearly effortless to read as Murakami has a natural talent for writing with simple language, realistic characters doing every day things with which we're all familiar. Yet at the same time, strange things happen that make the reader question what is reality and what might be a dream, hallucination or something "other." Murakami strings together a series of events and repercussions that transform the story into something of epic and thought provoking complexity that can be interpreted by readers in an infinite number of ways. It all sounds really 'out there,' and quite frankly, it is.

Yet at the same time it is literature that is accessible to any reader because in the end, the interpretation is left open to the individual. There is no wrong or right interpretation or analysis of this book.

Some specifics about the book that kept me from really enjoying it.. Throughout most of this 600+ page book, I felt that there were clues on every page that I ought to be mentally cataloguing for future reference as the story progressed or for connecting with events that already occurred. Important insights and connections between characters past and present.. events in reality and in "the other side".. I had a hard time putting my finger on all of it.

There are many components of this book that still stump me. At the end of a chapter, I'd often find myself thinking, "Okay so what is the point of THIS chapter?" Some chapters definitely felt more relevant than others and but those that felt more irrelevant to me? Some of those I never figured out how they contributed to the whole at all.. why or how was that connected or how deep was the connection?

For example, the recurrence of the baseball bat. Introduced in one of the zoo massacre chapters, what was the point of that entire scenario other than to show a baseball bat that would become important in another chapter, by another person in another time. It wasn't even suggested that it was the SAME baseball bat. Was it just another thread in which Tarou Okada was connected to the zoo veterinarian who was Cinnamon's father? Or is it more symbolic than that? Was the purpose of the zoo-baseball bat massacre JUST to make a later connection with a baseball bat and if so, was the elaborate display necessary? Personally, I would have been happier never having read that chapter and maybe one or two others as well, but that's just personal comfort level, I think. Needless to say, I kept thinking I was missing some great significance of the recurrence of the baseball bat other than it connected people and time. Was there more to it? I don't know.. And maybe, just maybe, that uncertainty in me as a reader was Murakami's intention. Well, perhaps not striving for it, but I think Murakami would be totally cool with readers not quite making everything in this book "fit." Because it's not supposed to. He wants things to be left open-ended for readers to speculate, imagine and interpret in their own ways, relevant to our own thoughts and personal life experiences.

So how do I feel about this book? I have mixed feelings. I finished this book with a feeling of "Huh. I guess that's it." Not the usual sentiment I imagine most authors desire, yet for some reason, I actually think that could be what Murakami was striving for. Or if that was not his intention, I think he'd find it totally acceptable for readers to not quite make everything they read "fit" just right. Imagine looking a jigsaw puzzle, the image of a piece of abstract art. Now imagine random pieces of this puzzle missing.. it's still a piece of art. Still something worthy of interpretation and admiration, maybe even more so had all the pieces fell into place. Can you see that? THAT is what this book is like to me.

I gave The Wind-Up Bird Chronicle 3 out of 5 stars on goodreads-- 'I liked it."

I may not have understood everything, particularly the excessively surreal aspects of the book and some chapters were quite disturbing and in my opinion didn't significantly add to the quality or progress of the story, The Wind-Up Bird Chronicle certainly gave me a lot to think about!

Posted by Christine at 8:30 AM