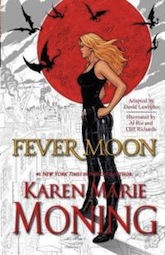 Fever Moon is a graphic novel story from Karen Marie Moning's popular urban fantasy Fever series featuring Mackayla "Mac" Lane. Fever Moon is basically a short story that takes place during the events of Shadowfever, which is the fifth and last book in the Fever series. There is a new spin off series, however, The Dani O'Malley series that starts with the newly released novel, Iced.

Fever Moon was written with the fans of the Fever series in mind, and I do believe those are the readers who will enjoy this novel the most. The author does provide some background information in the series in the first few pages of the graphic novel, but it's really difficult to set the stage of the world building and character development that has already taken place in five full length fantasy novels in just a few pages of a graphic novel. Hence, I'm not really sure if someone who hasn't read the series and picks up this graphic novel will really get what's going on in the Fever world. Maybe it's not critical, anyway, as the plot for this story is not necessarily complex.

The villain in Fever Moon is The Fear Dorcha, a being who was created when the Unseelie King was experimenting in creating his own Soul Song--the power to create immortal life. The Fear Dorcha is a faceless being who steals parts of people's faces in order to create his own face. Once he has completed his created face from all the pieces of his victims, the victims die. Mac races to find the Dorcha and figure out a way to stop him from finishing his face before the last victim is claimed so she can save the lives of these innocent people, among them some of her friends. I thought the conflict was resolved a little too easily and actually ends rather open-ended. Perhaps things will be re-visited in future books in the Dani O'Malley series.

The illustrations in Fever Moon are vividly detailed and effectively evoke the tone and setting of the Fever series very well. I think I prefer the images of the characters that I already had in my head after reading the series than the ones portrayed by the illustrators of the book, but I suppose that's normal. I thought Mac was drawn excessively voluptuous and Barbie-doll like, but perhaps I just visualize her as more wholesome for my own preferences.

Overall, Fever Moon is an okay read. Fans of the Fever series will likely love it because it's a fun, unique way to visit Dublin AWC, or After the Wall Crashes, giving a graphic glimpse of their favorite characters--Mac, Jerricho, Dani and plenty of others including the Seelie Prince Velvet, Dreamy Eyed Guy and Ryodan. Everyone else will likely think is just okay.