Note: If you've already read Anna Karenina, please feel free to join in this Read-Along discussion. However, please refrain from discussing any particulars past Part Two of the novel at this point so as not to spoil anything for the first time readers. Thanks! 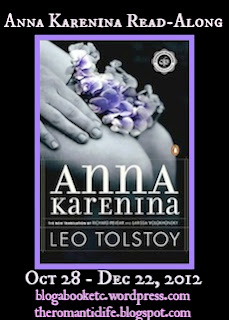 Part Two of Anna Karenina delves deeper into the novel's primary theme of family relations. The story arcs expand as relationships fall apart and others show signs of strengthening. Characters are further developed as they struggle with relationships with family, friends and lovers, as well as their own personal inner turmoils.

CAUTION: This is a Read-Along discussion post so you can expect spoilers from the first two parts of the novel. Read at your own risk!

1. Kitty's health has deteriorated as a result of her heartbreak and so she travels to a health spa in Germany with her parents in hopes of reviving her health. It is here that Kitty befriends the young woman Varenka whose actions and beliefs Kitty admires tremendously. What is it about Varenka that has Kitty so enamored? At one point Kitty says she will never marry. Why do you think she says this?

3. Tolstoy writes to great length and detail about the steeplechase. Did you get the sense that these passages foreshadow events among the characters? If so, what?

4. What are your overall impressions of the book after reading Part Two? Are you enjoying the story? Do you like Tolstoy's writing?

My responses to the discussion questions:

1. When Kitty sees Varenka tending to others, particularly those who are ill or less fortunate, simply out of the goodness of her heart, Kitty begins to realize that being a good, caring, charitable person provides a lot of purpose and even happiness to one's life. She soon realizes it can also backfire as it did in the case of the artist Petrov, but I still think she learned a valuable lesson from Varenka. I think Kitty's claim that she'll never marry is more a defense mechanism than anything else. It's her way of protecting herself from any future heartache or humiliation. Eventually, I hope she realizes she can have both in her life--happiness from being a good person to others and happiness in marriage.

2. I sadly don't think what Anna and Vronsky share is true love. They clearly share an undeniable attraction and passion for each other, but it mostly feels like they are using each other to fill a void in their lives, and quite unsuccessfully at that.

3. At first I was wondering why Tolstoy wrote so much detail about the steeplechase until I started to realize that Frou-Frou's [Vronsky's horse] behavior and temperament matched that of Anna regarding her relationship with Vronsky. Both want the ultimate prize--Frou-Frou to win the steeplechase and Anna to have a loving and passionate marriage--but both are also rather skittish and reckless. Ultimately, Vronsky makes a rash, careless move that brings down his horse in the steeplechase. I have the feeling he's going to do the same regarding Anna.

4. I'm still enjoying reading this book, but realizing it is definitely more a tragedy than it is a love story. I think all of the families and relationships are a mess and whose futures look rather glum. I do, however, have hope that Levin and Kitty will be the exception and their story will be one with a true happily ever after ending. We shall see.. there are still over 600 pages to go! Tolstoy's writing is exquisite, despite being rather long winded. He articulates characters' inner struggles and emotional tones very, very well, but sometimes I wish he'd just spit it out instead of describing these things in a long roundabout kind of way. 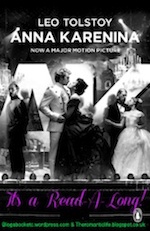 It's not too late to join us in the Read-Along. Fay from Blog A Book, Etc. and I are also moderating an Anna Karenina Read-Along Group on goodreads. Anyone is welcome to join at any time--just send a request to join on goodreads. We'd love your company!
Posted by Christine at 9:49 AM

Labels: books, Read Along, the classics