The theme for August's TBR Challenge hosted by Wendy The Super Librarian was "steamy reads." Without any hesitation, I knew I would chose a book from my TBR pile by author Megan Hart. I've read several of Hart's novels in the past, have a few on my TBR bookshelf and yet more on my wish list. Obviously I'm a fan of her work.

Megan Hart writes erotic fiction--but really unlike anything you'd imagine a book of this genre would be like. Although there are romantic elements to her books, and they are love stories at their core, the books are not what most readers would classify as a romance novel. The endings are not always happily ever after type endings, but they do end with a satisfactory level of closure. The stories simultaneously revolve around the lives and love stories of two or more characters. Hart's stories are a unique form of women's fiction. Women's fiction with honest, natural eroticism that shows the multitude of ways people are bound together by sex and love. 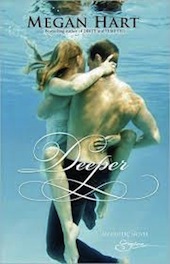 Deeper is not my first book by Megan Hart and it certainly won't be my last. Despite the fact that her stories often tend to leave me a little broken hearted, I still go back for more. Her stories are not easy on your heart and will likely challenge your personal moral compass. They're emotionally complicated and the conflict resolution is never easy or obvious. The stories sometimes make you uncomfortable, but they make you think, empathize and learn about human nature. And because of that, the characters and their stories are unforgettable. I end up thinking about them for a very long time after I've read the book. Weeks, months and even years.

Deeper is the story of Bess Walsh and Nick Hamilton through alternating glimpses into their lives at different time periods--Then and Now. Then is the summer Bess and Nick met when she was 20 and he was 21 at Bethany Beach. Bess was the college girl, working a summer job in the beach town while living at her grandparents beach house. Nick was the local bad boy. Bess' relationship with her long time boyfriend at home was falling apart and what she thought was love was nothing compared to the depth of passion and longing that she felt with Nick. They were undeniably drawn to each other in ways neither one of them had ever felt before. An attraction so deep that they'd be forever etched on each other's souls. Sadly, their love for each other was limited by how far they could break through their insecurities and vulnerabilities and they never saw each other again after that summer.

Until twenty years later, that is. Bess' marriage has failed and she finds herself back at her grandparent's beach house once again, still grieving for the lover she never got over--Nick. Standing at the ocean's edge with nothing but love and longing on her mind and in her heart, she cries for him and his name falls from her lips. Suddenly his mouth is on hers and his hands are on her body. A gift or a curse, neither one is sure, but a second chance is what they've been given and a second chance is what they're going to take.

One of the most compelling aspects of Hart's characters is that they are so very real and flawed. They have real problems, make life altering decisions, make real mistakes and have to deal with the consequences. The mistakes they make aren't easy to fix and sometimes they continue to make the same mistakes over and over again. There are several crucial secondary characters who contribute to Bess and Nick's story, such as Bess' husband, her two teenage sons, and her friend Eddie from that summer long ago who is now a business owner in Bethany Beach, but what goes on between Bess and Nick--and their personal issues-- is what's at the heart of Deeper.

Nick is the charming, sexy, aloof bad boy. He has the reputation of being a player and not sticking around. He admits he's an asshole and absolutely doesn't talk about he feels. He has issues trusting others--even those who promise to be there for him. Deep down, he's pretty insecure when it comes to emotional relationships. Not when it comes to sex, though. He's definitely uninhibited there. But when it comes to expressing how he feels, what he wants or any emotional intimacy--that's a tremendous obstacle for him and he just closes up. Eventually he drops hints of how he feels about Bess here and there, but because of HER issues with self doubt, it never really sinks in with her and what little does sink in, she doesn't believe him.

Then there's Bess. Every man she's ever loved has never been fully open and honest with her. He's either been a cheater or has the reputation of being a cheater or a player. Naturally this makes her even more susceptible to self doubt than she already is by her very nature. The men she is drawn to only fuel her self doubt and it's no wonder she feels unworthy of a faithful, long time lover. All of this inhibits her from being honest with herself and from speaking up for herself, her needs and wants in her relationships. As the story progresses, though, she starts to learn to be honest and upfront with how she feels in her relationships and to make healthy decisions in her life.

Deeper is one of those books that's just so darned hard to review. There's so many facets to this story to discuss, but near impossible to tell about in a review because it's the readers journey that's just as important as the character's journey. The reader gets jumbled up and tossed about as easily as the characters. It's so much better to experience it yourself than through another reader's eyes. So go read it.

I give Deeper 4 out of 5 stars on goodreads, but if I could give half stars, I would give it 4.5 out of 5 stars. Why not 5 stars? Something about the supernatural aspects of this story just pull me out of the story. It's not quite paranormal and definitely not realistic, but somewhere in between, a place I have trouble with. While I feel this book is mostly Bess' story, it is also Nick's, yet it was difficult to find his personal growth in the Now. I'm not sure what he learned from his second chance. [I think you should read the book so we can discuss this]. Overall, though, this was a wonderful, unforgettable read that will stay in my thoughts for a long time.


Other books I've read and loved by Megan Hart:

I also have Broken and Dirty by Megan Hart on my shelf, but haven't them read yet.

Have you read any of Megan Hart's books yet? Which ones?

And if not, what are you waiting for?!

Posted by Christine at 6:38 PM