A True Story of Good Friends, Crushing Heartbreak, and Astonishing Luck on Our Way to Love and Motherhood

This is the G selection for the Authors by the Alphabet Book Club for the month of June 2011. This book was selected by Marce who blogs at Tea Time with Marce where you can find her review and links to the Q&A book discussion posted by other book club members. Anyone interested in joining the monthly book club is welcome and invited to join on the Authors by the Alphabet Book Club sign up post on Paula's blog. 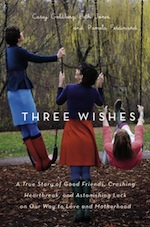 The title and subtitle of this book explains largely what this book is about, but to elaborate just a bit, it is a memoir co written by three friends who have found themselves at the same cross road of life and how they proceed to make at least one of their wishes come true---to be a mother and everything else that happens to them during their journey to motherhood. Carey, Beth and Pam are all successful journalists, each with a string of failed relationships behind them and now in their late thirties, feel very strongly about pursuing motherhood as a single parent. Carey is the first to start on the road to motherhood by purchasing eight vials of sperm from an anonymous sperm donor. But just as Carey prepares for insemination, she meets someone and is soon pregnant. The vials then get passed to Beth who has finally put a difficult divorce behind her, but she, too, meets a man who might just be the one and also gets pregnant. Finally the vials get passed to Pam, the romantic of the three women who is always on the lookout for true love, but is not willing to let the chance at motherhood pass her by before she's too old to conceive. Happily, she, too, finds love in the nick of time. This is a very simplistic overview of what these three women go through in their unconventional pursuit of motherhood. They experience uncertainties in their relationships, challenges with balancing their jobs with their pursuit of motherhood, as well as heart wrenching losses and deep felt sorrow that will be a part of them forever, but in the end this memoir tells the story of how three women found true love and motherhood perhaps later than most women, and maybe in a different order, but not at all too late to live "happily ever after."

The chapters rotate between narrations from Carey, Beth and Pam pretty much in chronological order as they each pursue their ultimate goal of becoming a mother. They share pertinent anecdotes about their careers, living arrangements, their extended families and of course their mutual friendships. They also share their past relationship failures, the experiences and challenges of their current relationships, terrible losses and tremendous joys that make the journey to love and parenthood worth every emotional scar we ever bear.

The writing in this memoir flows very easily, and Carey, Beth and Pam include a lot of conversations they've had with friends, family, lovers and other significant people in their lives, and that dialogue helps the book read like a story and not just a string of events, the latter of which could easily lead to boredom with a memoir. While reading the first few chapters, I admit that I felt quite removed from the women's situations, largely because my life path was so different and I couldn't quite relate to being 40-ish years old, a wealthy career woman, single with no love interests on the horizon and no child of my own in my heart. However, the more chapters I read in this memoir, the more absorbed I became in these woman's lives, the more I empathized with their situations and the more I grasped onto the hope that they would not only become mothers, but also find permanent love in a healthy marriage.

One of "issues" that I have with this book --and it's not even really an issue, but more of an observation-- is that Carey, Beth and Pam were all financially well off and could easily afford to pursue the medical avenues of getting pregnant on their own as well as the child care expenses after the baby's arrival. It just doesn't seem realistic that there is a large demographic of 40-ish women out there who can afford such lifestyles and the freedom to pursue single motherhood like these women did.

Also, Carey, Beth and Pam's stories were so similar and their narration voices so similar that at times I had a difficult time keeping track of whose story I was reading and I found myself flipping around a few pages to jog my memory.

Ultimately, I found Three Wishes to be a thought provoking and very personal look into the lives of these three modern women who were so determined to have children of their own. They survived many difficult situations, made life altering decisions and learned to live with those decisions, and above all they were very lucky to have had their three wishes come true.

In closing, I'd like to end my review with my favorite quote from the memoir. It is a quote from Pam, the final recipient of the donor vials around the time she decides with certainty to pursue having a child on her own. I think this passage captures the essence of what each of these three women feel and why they were so incredibly determined to become mothers. I think I would have felt the same if I were in their place.

"Finally, at thirty-seven years old, I confronted myself. I considered what I could not live without and immediately knew it was a child. That for me, life would have a far lesser purpose if I could not be a mother. I once read that the ancient Egyptians described childless women as 'mothers of the missing ones,' and that imagery wrenched me to the core. I could almost feel an ache in my bones for the child who would be missing to me." --Pam [p. 108]