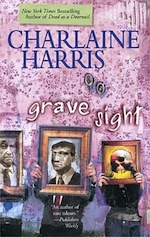 1. Let's start with the obvious. Did you like the book? What's your overall impression?

I liked it very much. The mystery wasn't too complicated, yet compelling enough to hold my interest and Harper is such an interesting character. I wanted to keep reading to see how she did her job and I wanted get to know her better.

I'm accustomed to the protagonists in the books I read to be warm, likable people, but Harper comes across more indifferent, if not cold. You'd think this would make it difficult to warm up to her, but Harris actually has a knack for writing such a character in a compelling way with an inner vulnerability for which you can't help but empathize. Harper's past makes me sad and I can't say much about her present situation either. She has her work and she has Tolliver, but I sense that they're both kind of sad and lonely and they're definitely treated more with hostility than with kindness in their livelihood. I'd really like to see Harper heal some more and be genuinely happy.

3. What did you think of the murder mystery and the people of Sarne, Arkansas?

Oh my what a horrible mess! Even before the murders, these people really needed some help. I'm glad the murderer was figured out and held accountable, but what a waste that he had to take those lives like he did--the lives of people he should have been taking care of no less! Poor Nelly Teague! She is going to have a rough time processing everything that's happened to her family. I'd like to think she gets the psychological help she needs and maybe leaves Sarne behind for a better life somewhere else. I was glad to hear Harper praise Nelly at the end and assure her that she'd grow up to be a great woman. I think Nell needed to hear that. I'd also like to think she and Hollis remain good friends and support each other over the years. It's a nice thought, right?

4. Do you think Harper will ever find out what happened to her sister Cameron?


Harper is convinced that Cameron is dead, but has never located her remains. Of course the romantic and optimist in my would like to believe Cameron is still alive and will someday reunite with Harper. This series isn't exactly the sugar-coated kind and she has been missing for a long time already, so I think it's more likely that Harper will find Cameron's remains and help release her soul as she did for Helen Hopkins in Grave Sight.

5. What do you make of the relationship between Harper and Tolliver?


To me, it's obvious their relationship goes beyond simply step-siblings and I sense a chemistry between them that's unusual, but makes sense. They lived under the same roof since they were teens, but it really doesn't seem right to call them brother and sister. Not just because they're not blood related, but also as a result of their extremely dysfunctional upbringing and because of the way their selfish, cruel and negligent parents basically forced them to take care of themselves and essentially act as parents to their step siblings born to Harper's mom and Tolliver's dad. Harper and Tolliver's closeness actually feels more powerful than brother and sister or even friends after they survived what they did growing up. I feel sad for them, really. I guess we'll have to read the rest of the books in this series to learn more about these two.

6. Do you think you'll continue reading this series?


I definitely will! Harper is interesting enough to make me want to read more. I think the mysteries will be fun to read, but mostly I feel I need to see Harper figure out how she wants to live. I don't see Harper and Tolliver making their living like this forever. If anything, they need a home and maybe even an office. Some structure. Some peaceful happiness.


Tune in next month when the Authors by the Alphabet Book Club read a book by an author brought to us by the letter 'I'.  On which we're still deciding! Any suggestions?
Posted by Christine at 3:33 PM