Happy Earth Day and Whatever happened to that Sunchips bag in my compost pile?

Last year on Earth Day, I posted about my compostable Sunchips bag experiment. I'm sure most of you heard that Sunchips invented the world's first 100% compostable chip bag in 2010. I put the bag to the test in my backyard compost pile on Earth Day last year {April 17, 2010} and guess what? It worked!

According to Sunchips, the bag is fully composted in a municipal compost bin in as little as 14 weeks. In my little backyard compost pile, the bag has been decomposing for a full year now {52 weeks} and while there is still some small identifiable remnants of the Sunchips bag, it's almost gone! Keep in mind that I put the bag into my compost pile whole. If I had cut or torn the bag into pieces on the first day, it would likely be full composted by now. But I let nature do all the work on this one. Another reason why the bag is taking a long time to decompose in my backyard pile is largely due to the fact that my backyard compost pile is sometimes too small-- even smaller than the recommended minimum size for an active pile. That means that it's often not hot enough to be actively composting. The process slows down dramatically when the pile is too small.  Large scale municipal compost setups are much more productive.

Here are some photos documenting the decomposition of the Sunchips bag in my backyard compost pile: 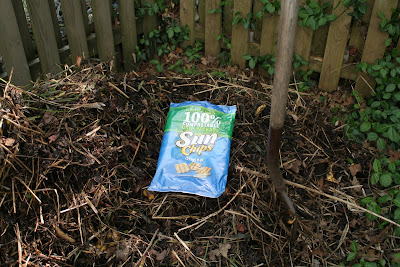 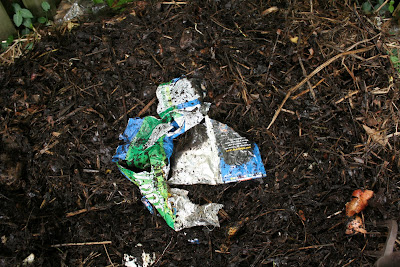 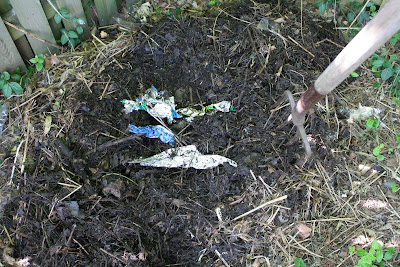 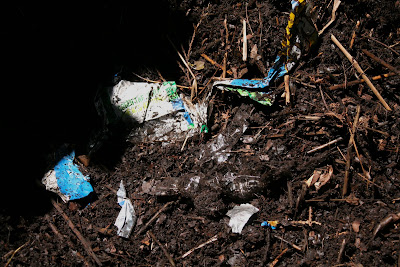 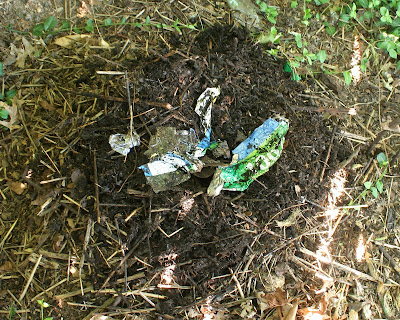 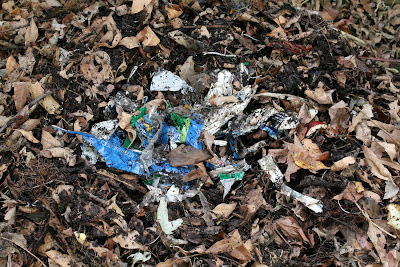 Day 175
October 14, 2010
Then winter came along and Mother Nature dumped a whole lot of snow on me. And dumped and dumped and dumped... making it enough of a chore to trek through all that snow to dump my under-the-kitchen-sink compost bucket out there without having to carry my camera, too! So no winter compost pile photos.
Then the snow melted and spring ever so slowly came along. Still working on that, actually. And voilá! My compostable Sunchips bag {nearly} one year later: 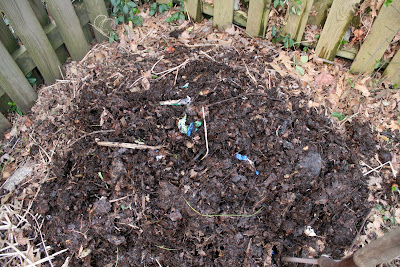 Day 360
April 17, 2011
I had to dig through the pile to look for those pieces of the bag still lingering. Perhaps another six months it will be completely gone.

All the while my chip bag was decomposing in my backyard, the scientists at Sunchips were busy redesigning their compostable chip bag to be quieter. Do you remember how noisy it was? Well, now you can cheat on your diet again without everyone in the house knowing. ;)

If you have even a small parcel of land to claim as yours where you live, why not start a compost pile? It's so easy and actually really fun to take all the dried leaves that fall in your yard and the fruit and vegetable scraps from your kitchen, pile it up in a corner, mix it up now and then and watch it turn into nutrient rich compost for your garden. Composting reduces the volume of trash in landfills and essentially provides you with free fertilizer for your yard that the earthworms and other micro-organisms are more than happy to make for you. Spread finished compost in your vegetable and flower beds, around shrubs and trees and even sprinkle it in your lawn.


For more information on home composting:

Posted by Christine at 6:38 PM

Labels: in the garden