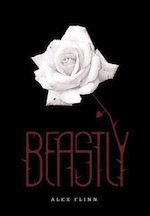 I read Beastly by Alex Flinn based on a recommendation from Angie back in March of this year when she posted the trailer for the upcoming movie version of the novel, which happens to be one of her favorites that she reviewed way back in November 2007. Angie has superb taste in books and has never steered me wrong, so of course I had to read the book, and before the movie hits theaters this summer!

Beastly is a contemporary young adult retelling of the Beauty and the Beast fairy tale set in modern day New York City. The Beast is Kyle Kingsbury who used to be the best looking, most popular and richest guy in the school who had everything and more. Except maybe virtues. Which in the end is the ruin of his seemingly perfect life. Because he is unkind, rude, presumptuous, selfish and basically beastly, he is cursed to actually be a beast for eternity. One small act of kindness before he is cursed allows him one and only one chance to break the spell. If he falls in love with someone, and she loves him in return, the curse can be broken. Only true love's kiss will break the spell, and it has to happen within a year or he'll be a beast forever.

Once Kyle is cursed to be the beast, his life as he knew it is over. He still has anything money can buy, but now lives like an outcast hiding in his New York apartment, his housekeeper and his live-in, blind tutor his only companions. Kyle's only contact with the outside world is either through the internet or by sneaking out at night to prowl the streets in a disguise.

I did find Beastly to be predictable in that the character roles of Beauty and the Beast and the story line didn't stray from the classic fairy tale, yet I still found the novel captivating and thoroughly enjoyable. The author did a fantastic job of molding the story to a modern setting and modern characters, more so than I imagined possible. Kyle's transformation from egotistical, privleged teenage boy with entitlement issues to a caring, sensitive young man... err.. beast, was realistic and convincing as the story progressed. Well, as realistic as a teenage beast roaming the streets of New York City could be, anyway. ;)

Likewise, Lindy Taylor--the young girl who portrays the character of 'Beauty', is realistic in her actions and reactions towards Kyle as well, save for one part which was the manor in which she became the Beast's prisoner. Although her capture is not exactly her own doing, I had to stretch my believability just a little too far to make it work in my mind, but heck--it is a fairy tale and it does take place in New York City, so anything can happen, right? Otherwise, Lindy was equally believable as Kyle, and perhaps even more so than the Grimm's fairly tale version or the Disney version since the girl from Beastly is more average on the outside, yet beautiful within. I think that difference even improves on the depth and reality of the whole moral of the story.