Published in 2001
Open Season is one of the books I brought home from the library last week upon a recent recommendation from Nath at Books, Books and More Books and other romance reading friends, so I decided to give it a go. 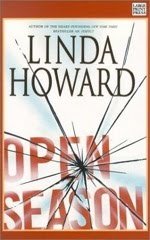 Open Season is a stand alone contemporary romantic suspense novel.
Daisy Minor is the town librarian and lives a quiet, simple life. She's 34 years old and still rather inexperienced with men and hasn't had a date in years. Still living at home with her widowed mother and aunt, Daisy decides to put an end to her boring, lonely life and makes some changes in order to be more independent and accessible to single men. Essentially, she declares it open season for hunting for a husband. She finds a small cottage to rent across town and with the help of a seemingly gay antiques dealer and friend, Daisy gets a makeover including a new hair color and cut, a new wardrobe and a new passion for line dancing.

Before even having made these exciting changes, the local police chief, Jack Russo shows up at the library a couple of times for assistance and on both occasions, they frazzle each others nerves, yet there's a subtle attraction between them nonetheless.

After her makeover, Daisy sets out on the weekends for evenings of line dancing and meeting men. Heads are definitely turning her way now, and she is drawing the attention of all sorts of men at the bar, including those with nefarious plans. Trouble seems to follow Daisy, and she barely manages to sidestep being the victim in a seriously disturbing crime ring that's taking place within the community that deals with date rape drugs and the sale of young, foreign teenagers who are being sneaked into the country and sold to rich perverts and gangs.

The romance between Daisy and Jack is fun and sweet. Although at first I found Daisy's inexperienced librarian character too cliche, I couldn't help be entertained by her honest, open and somewhat naive approach to the world as she explores her independence. She has such verve for life and her desire for a simple, happy life full of love and laughter. She effortlessly drove Jack crazy and I appreciated the ease at which he came to realize that she drove him crazy in a good way and that it made him crave her company even more. Why wouldn't he? She's kind hearted, honest, adorable and fun! There's never a dull moment with Daisy.

The suspense plot of Open Season is based on a serious and disturbing crime ring involving date rape drugs and the sale of young, illegal immigrant women that felt a bit incongruous with the fun, light hearted nature of the romance plot. I also felt I couldn't quite take the suspense element seriously enough because the men organizing the crimes seemed so stupid and careless. I suppose one could argue that that's why they got caught in the end, but I still thought they were too stupid to have even taken the crimes as far as they did in the first place. I think the novel would have been more cohesive and realistic if the crimes were simply less severe in nature for this fun loving romance between Daisy and Jack. Despite these issues, however, Open Season is well worth the read due to Daisy Minor's high spirited, warm character and the amusing, sweet romance between her and Jack.

Overall, Open Season is an entertaining romantic suspense novel--the romance being this story's strength with generous doses of humor and tenderness that leads to a delightful story book happily ever after.

Posted by Christine at 6:07 PM