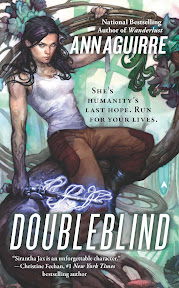 Ann Aguirre holds rank as one of my very favorite writers of romantic science fiction in the form of her Sirantha Jax series. She also writes the unique and refreshing urban fantasy series titled the Corine Solomon series that begins with the novel Blue Diablo. In addition, Ann writes paranormal romance as Ava Gray, of which her first novel titled Skin Game is to be released on November 3, 2009. While I have yet to write a review of one of Ann's books on my blog, I cannot emphasize enough how much I admire Ann and love her written work.

So how do I love Ann Aguirre? Let me count the ways.

(There's more, but these three are my favorite ways.)

The Sirantha Jax series is a romantic science fiction series that follows the adventures and misadventures of Sirantha and her crew as they struggle to do the right thing as they jump through space on various missions and sometimes they aim just to stay alive. Sirantha is an invaluable resource throughout the universe as she carries an extremely rare gene that allows her to be the tool to literally jump a ship through space, traveling unfathomable distances in short amounts of time. She can't jump alone, however. She needs to be jacked in with a capable pilot whom she trusts in order to jump successfully.

When the reader first meets Jax in Grimspace, she's sitting in a jail cell, numb from loss and uncertain of her fate. As the sole survivor in a horrific crash, she's lost her entire crew, including her pilot, friend and lover, Kai. She doesn't remember the crash, and is being blamed for the crash and consequently the deaths of important officials whom she was transporting for the Corp when they crashed. A small rogue faction breaks her out of jail on the condition that she be their jumper for their mission to overthrow the Corp. Of course, the rogues are not completely forthcoming with the details of their mission until she's jumping for them, but needless to say, she's jumped feet first, so to speak, to the point of no return.

So what exactly is it about Sirantha Jax that makes me stumble over my words when I want to articulate how this character moves me? As I read the Sirantha Jax novels, I feel Jax more than see her. She's like a bundle of complex, often dichotomous emotions that play into my own. She starts out numb, cold, selfish, rash and even hostile. For someone who has the ability to jump all over the universe, she doesn't know a whole lot about the world. In the company of the rogues, however, she gets a crash course, so to speak. Jax slowly begins to thaw and mature as she gets to know and care about her crew and their mission. She starts to learn to trust, care and even love, sometimes resulting in the most unlikely of friendships. She starts to recognize her ability to and the opportunity to do something to make a positive influence in the universe. Disaster still seems to follow in her wake, but she becomes more admirable and heroic as the series progresses. To make things more interesting and complex, her pilot and lover in the series--March, is as much her opposite as he is her match. Almost extremely so by the end of Wanderlust, which has made the anticipation of Doubleblind doubly intense. Thankfully the wait is over. Doubleblind releases today--September 29, 2009 and I've already scored my copy!

Even if you don't think you like science fiction, the Sirantha Jax series will change your mind. The world is smart, creative, and complex--yet never confusing. The characters are flawed, but genuine and realistic. The story is full of political intrigue, controversial scientific advancements, and even issues of equality among the species. There are intense action sequences, shocking plot twists, and emotional impact when least expected. And there is a love story that is crucial to the emotional development of the Jax and March, but is seamlessly written within the story as a very natural extension to the relationship between pilot and jumper, friends and lovers. It's almost subtle. But it's not. Just read the series yourself and see what I'm talking about.

On a side note, I was invited to write a guest column for the October edition of Ann Aguirre's monthly newsletter Action and Attitude. In my column, I discuss why I read YA and how it was my gateway genre to reading across the spectrum of romance and fantasy fiction genres I do today. You can download the newsletter by subscribing to Ann's Google group or directly from her website at http://www.annaguire.com/touch/. Please check it out.