The Windflower is now docked in . . .

Have you gotten wind of The Windflower World Tour Yet? It's a blogging extravaganza that was started by Ciara Stewart and Ana of The Book Smugglers. You can read the details of The Windflower World Tour at Ciara's blog HERE, but basically a single, rare copy of the 1984 romance novel, The Windflower by Laura London is being sent around the world between twenty-three blogging friends in order to acquaint romance readers with this historical romance novel that is beloved of many romance readers and considered classic old school romance that shouldn't be missed. Each blogger has two weeks to read, review or discuss the book on their blog, and post a picture of The Windflower in their town/city before shipping the book off to the next blogger. So far The Windflower has reached the following ports:

Cambridge, UK.
Ana of The Book Smugglers discusses The Tour and reviews the novel.

Alabama, USA.
Kmont of Lurv a la Mode discusses the novel and reviews it as well.

I encourage you to click on those links and read the Windflower posts by those three wonderfully insightful bloggers. Be sure to read the comments in those posts as well for some really interesting discussion. The observations and insights into this much loved classic novel by different readers is fascinating and I'm really curious to see how it is received on the remainder of the tour.

And now The Windflower has landed in my port. Well, technically it landed here almost a month ago and shamefully, I let it sit in my bunk without cracking it open for a few weeks. Out of fear of having to walk the plank on The Windflower Tour, I begged for mercy from my fellow Windflower shipmates and asked for an extension. In order to defend my reason excuse for not having started it yet, I present the following picture of The Windflower sitting on my once upon a time kitchen window sill when my kitchen was being gutted back on November 13. 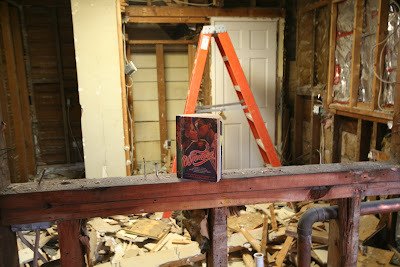 The verdict from my Windflower shipmates? I have gratefully been granted an extension. I'm so glad that I did, too, because I finally started reading it and guess what? I like it! I'm about a hundred pages in and am actually fairly captivated by the characters and plot. Yes, the language is often "flowery," and yes, the author can be overly verbose and descriptive on topics seemingly completely irrelevant to the story, and yes, the characters and plot devices seem a bit stereotypical and cliche, but really, so far . . . I find it a bit amusing, quite entertaining, and kind of sweet.

The fact that I'm entertained by the relationship between Devon the rogue pirate and Merry the young, innocent, virtuous fair maiden is a bit disconcerting. I shouldn't be enjoying Devon's aggressive, unwelcome advances toward Merry. I shouldn't be enjoying her feeble, barely successful attempts at stopping his advances. But I can't help it! I love when Merry fights Devon both verbally and physically as she struggles to escape his embrace, all the while trying to understand and control her newly blossomed sexuality. And just when I think Devon is the ultimate jerk, he says or does something that makes me think he sees something in Merry that he's never seen in another woman. She stirs something in him that no other woman ever has, making her worth all the trouble in the world to keep. Assuming she figures out she wants to keep him as well, that is. 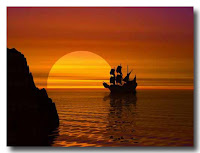 So I continue on with The Windflower, curious to see where the goings on aboard the pirate ship, The Black Joke, takes me next . . .
Posted by Christine at 6:12 AM