While attempting to tackle over 1200 unread posts in Feedly the other day, I came across a new reading challenge on Harvee's blog Book Dilettante that I'd like to join. This one's for Japanese Literature! I'm pretty excited about this one because it will expand my literature horizons a bit, plus 2013 has become the Year of Japan for me, highlighted by our upcoming trip there later this summer. 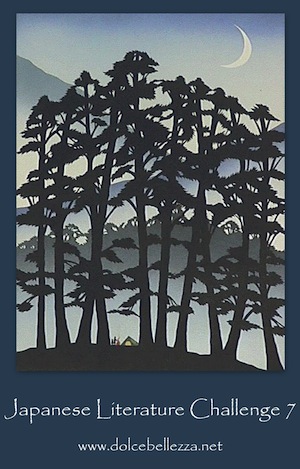 Goal: Read a number of works in Japanese Literature

Readers can chose to read a variety of genres in Japanese written works, including children's books, short stories, mystery, biography, sci-fi/fantasy, manga and poetry with an optional monthly theme. June is children's literature.

I'm planning to read at least five Japanese books. I'll keep a running list of the books I read for this challenge here, editing this post as I go along. Below is a list of five books I'm strongly considering, which is open to change as I discover more about Japanese literature.

1. Sputnik Sweetheart by Haruki Murakami
2. Kitchen by Banana Yoshimoto
3. Never Let Me Go by Kazuo Ishiguro
4. Spring Snow by Yukio Mishima
5. A Tale for the Time Being by Ruth Ozeki [Japanese-American author]

I know it doesn't really count because it's not written by a Japanese author, but I also plan to read Memoirs of a Geisha by Arthur Golden. Come to think of it, I'm not certain A Tale for the Time Being technically counts, either.

Have you read Japanese Literature? If so, what do you recommend?

1. Sputnik Sweetheart by Haruiki Murakami
2. A Tale for the Time Being by Ruth Ozeki [Japanese-American author]
3. Kitchen by Banana Yoshimoto
Posted by Christine at 8:35 PM