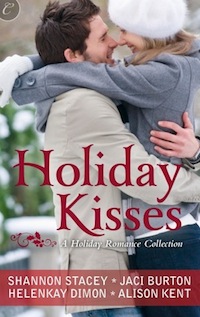 The suggested theme for the December TBR Challenge hosted by Wendy The Super Librarian is holiday romance and I chose to read the anthology Holiday Kisses. Holiday Kisses is collection of contemporary romance novellas that came out at Christmastime last year. I bought this one for myself last year but never got around to reading it, then waited a whole year to go by so that I could read it this December. Yes, I am a stickler about reading Christmas romances only near Christmas. Well, I finally read this one last week and really enjoyed it! So much so that I'm reading a sequel to one of these stories now.

"This Time Next Year" by Alison Kent

Brenna Keating is on her annual trek to her beloved Grandmother's house in the mountains for Christmas before she leaves for her new job abroad in Africa when her car swerves into a snow bank right in the middle of storm. The local physician, Dillon Craig, who is also the most eligible bachelor of the mountain, finds her and brings her to his cabin to wait out the storm. As you might guess, these two get really close over several days, talking and getting busy, if you know what I mean. They talk a lot and learn about each other and themselves. Both characters have some obstacles in their lives--Brenna's hesitancy about leaving her grandmother and Dillon's struggle to accept the military tragedies from his past that haunt him. Together, and in the spirit of Christmas, they learn from each other and get a realistic happily ever after. A very sweet love story that captures the essence of the holiday season and is sure to melt your heart.
GRADE: B+

"A Rare Gift" by Jaci Burton

Wyatt Kent gets a job building an addition onto the local child care center-- the one owned and run by his ex-wife's little sister, Calliope Andrews. This arrangement makes Wyatt super uncomfortable for several reasons. One, he and his ex, Cassandra, ended their marriage on bad terms, so he would prefer to avoid her and anyone associated with her. Two, Calliope is pretty, sweet, upbeat and stirs something in Wyatt he tries to stifle -- desire. Fortunately, Calliope is nothing like Wyatt's ex and she's got enough confidence, sass and good humor to handle Wyatt's cranky nature and eventually these two hit it off. It also helps that she's had a crush on Wyatt for a long time. They've got a few things to overcome, but that's part of the fun. I loved Calliope's positive spirit and it was great to see Wyatt come to terms with his failed marriage and recognize that he deserves true love even if it is a little awkward that he's found it with his ex's little sister.
GRADE: C+

"It's Not Christmas Without You" by HelenKay Dimon

Carrie Anders is finally chasing her dream of working in a prominent Washington, D.C. museum and has settled into her new city life. Unfortunately, she had to break it off once and for all with her on and off again boyfriend, Austin Thomas, who just couldn't accept her dream to seek a career in a big city. Austin insists Carrie just needs to get her grand ideas of a city career out of her system before she realizes she belongs back in their small rural West Virginia hometown with him. When he finds out Carrie doesn't plan on coming home for the holidays, he puts a plan in motion to make sure she gives up her crazy ideas and is home before Christmas. How does he do that? He sets up a tree lot right across the street from her apartment! Sounds romantic, right? Well, Austin needs a few lessons in respecting and accepting Carrie's dreams and ambitions before he learns the meaning of true love.

I loved the set up of this story. I found Austin's determination to win back Carrie heartwarming and his methods very charming, but boy did it take him long enough to realize her life dreams are just as important as his. I think Carrie could have been more upfront with why she was so exasperated with Austin's treatment of her ambitions and at the same time, I think Austin should have figured how important Carrie's career is to her after she got up and moved to D.C. Even then, it took him a couple of weeks in D.C. before he finally figured it out? It was a bit exasperating how they just danced around the issue and didn't just talk about it right from the start. Thankfully, their love for each other made them stick it out and finally figure out how to make their relationship work.

Interestingly, the conflict between these two drove me a little by their simple lack of communication, but at the same time, Carrie and Austin were two of my favorite characters in this anthology. Austin's brother Spence was also a great addition to this story--so much so that I'm reading his story right now. His story is "We'll Be Home For Christmas" in the Romancing the Holidays anthology published by Carina Press (2012), which can also be bought alone.
GRADE: C+

"Mistletoe and Margaritas" by Shannon Stacey

This story is a beautiful, sexy friends to lovers romance. Claire Rutledge was widowed two years ago when Brendan--her husband of only two years, died. Since Brendan's been gone, Claire become closer friends with her deceased husband's best friend, Justin McCormack. Justin has loved Claire for a while now, having been interested in her before Brendan ever made a move for Claire. He's been reluctant to ever make a move on her, though, out of respect for Brendan. Claire is finally ready to put herself out there in the dating world, but can't seem to think of anyone else but Justin. With the help of some mistletoe and margaritas, Claire makes the first move and sparks finally fly between these two. Their love and affection for each other--and their passion--was totally believable and very sweet. This story is a very heart warming, feel good Christmas romance. What's not to love?
GRADE: B+

I think it's pretty tough to pull off a convincing contemporary love story in just 100 pages, but these stories come pretty close. Of course it helps that they're Christmas love stories. Who can resist a good ole sappy Christmas story! These stories are all about delivering a believable love story doused with Christmas spirit. Holiday Kisses will certainly warm your heart this Christmas season. :)

For the anthology as a whole ... GRADE: B


Have you read any good Christmas romances lately?
Posted by Christine at 2:26 PM