So I'm finally reading the Elemental Assassin series by Jennifer Estep thanks to the Read-Along that's going on, hosted by The Book Vixen and Smash Attack Reads, and I'm pretty darned excited about it. And I'm pretty darned proud of myself, too, because surprise, surprise I'm actually caught up with the group! We started the series back in October and are reading one full length novel per month. The plan to be caught up by the release of the eighth book in March 2013. This month we'll be reading the fourth book, Tangled Threads. 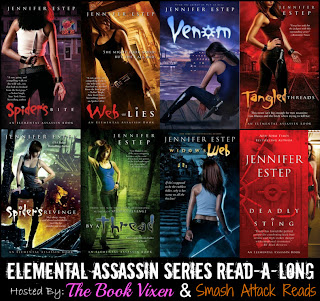 In addition to the full length novels, Jennifer Estep has written several Elemental Assassin online short stories that can be read on on her website at http://www.jenniferestep.com/excerpts-short-stories/. These stories are short stories, not novellas so they are short. I mean short. I'd say each one is at most 10 or 12 pages, but for fans of the series, they're pretty cool glimpses into various characters' pasts and or they show some aspect of the story from the point of view of characters aside from Gin Blanco. The novels are told from the first person point of view of Gin Blanco, the Elemental Assassin who is known as The Spider. I haven't reviewed the full length novels, although I'd like to. In the meantime, here are my thoughts on the Elemental Assassin online short stories.

CAUTION: There are some slight character and plot spoilers for the Elemental Assassin series in the remainder of this post. Read at your own risk!

"Poison" (Elemental Assassin, #0.5) This story takes place when Gin is a teenager, after she was taken in off the streets by her mentor and father figure, Finnegan Lane. Finn's son Fletcher is a few years older than Gin and highly resentful of her place in the Lane family. He's clearly jealous of his father's attention and affection for Gin. But Gin proves her loyalty and affection for the Lane family in this story. Poison is told from Fletcher's point of view.

A very short story, yet it accurately portrays some of Gin's strongest traits---loyalty, patience and calm lethality. I liked seeing how Gin was brought into the Lane family and thought Finn's reaction to her was very believable.

"Web of Deceit" (Elemental Assassin, #0.6)
Told from the point of view of Finnegan Lane, the owner of a barbecue joint called The Pork Pit who rescues Gin off the streets when she was just a young girl. This short tells the story of Gin's very first assassination that Finn assigns her when she's just a teen.

Again, the reader gets an inside look at what Fletcher sees in Gin from a young age, including the ways in which Fletcher can use Gin in his line of work. And yes, as much as it shows that Fletcher cares for Gin, I don't think I'm inaccurate when I say he uses her.

"Spider's Bargain" (Elemental Assassin, #0.7)
This story takes place just before the first book in the series, Spider's Bite. It tells the story of Gin Blanco taking down a corrupt cop in Ashland, who turns out to have been the partner of Donovan Cain, the cop with whom Gin alliances in Spider's Bite.

Gin's cold lethality is sharp in this one--I have to say it's quite refreshing to read about a female assassin who is so brutally good at what she does that it's even a bit shocking once in a while.

"Web of Death" (Elemental Assassin, #1.5)
This short takes place right after Spider's Bite. Gin has retired from the assassin business, but when she discovers some men ganging up on a woman a few short miles from her new place, she can't help but respond to the situation and some heads roll. Literally.

This short was okay. It didn't necessarily reveal anything about Gin's character that the reader doesn't already know at this point. I think we all knew Gin wouldn't be able to stay retired from the assassin business for too long--she's bored running the Pork Pit! What it does show is that Gin does have a moral compass. One that points directly at the evil bastards who torment the people of Ashland and whom she has no qualms about eliminating whether she's being paid to or not. Clearly she's doing the world a service.

"Wasted" (Elemental Assassin, #2.5)
This very short story can be found at the author's website. It's an Elemental Assassin series story that takes place between the events of Web of Lies [Book 2] and Venom [Book 3]. Wasted is told from the point of view of Finnegan Lane, Gin Blanco's foster brother. A beautiful female vampire suspiciously tarts frequenting the bank in which Finn works. Trouble follows, but nothing Finn can't handle. The story was rather flat, but it does reveal a little tidbit about Xavier, the part time cop and part time bouncer of the club Northern Aggression owned by Rosalyn Phillips.

"Tangled Dreams" (Elemental Assassin, #3.5)
This online short story takes place between the events of the third Elemental Assassin book, Venom, and the fourth, Tangled Threads and can be found on the author's website. Tangled Dreams is told from the point of view of the Devereaux sisters, Jo-Jo and Sophia. Gin comes stumbling to the Devereaux sister's house for healing, seriously injured after rescuing a woman and her young daughter from a gang of carjackers. This is a must read for fans of the Elemental Assassin series because it gives a fantastic look into the thoughts and feelings of the Devereaux sisters that hasn't quite yet been explored in the books. It also provides a little bit of insight into their past, particularly Sophia's which I must admit has me rather curious. I love the roles of Jo-Jo and Sophia in this series and I look forward to getting to know them even more in future books.

"Tangled Schemes" (Elemental Assassin, #3.6)
Another online short story from the Elemental Assassin series, this one is told from the point of view of Bria Coolidge, the new, straight laced cop on the Ashland police force. It takes place alongside the events of the first three books and ends around the same time that Venom, book three, ends. I liked learning what happened to Bria since the night her family was murdered by the Fire Elemental when she was just a young girl. We see that fateful night from her eyes and a little bit of how she lived her life afterwards. She learns about the possibility that her sister is still alive and she sets out to find her. The story also hints at a possible love interest for Bria. I hope it comes to fruition--I like the pairing!

"Spider's Nemesis" (Elemental Assassin, #4.5)
Taking place after the fourth book in the series, this online short story that can be found on the author's website and is told from the point of view of Mab Monroe, the nemesis Gin Blanco the assassin also known as The Spider. The story provides the background story for Mab's hatred of the Snow family that began when Mab Monroe and Eira Snow (Gin's mother) were just young girls. Readers also see the night of the confrontation between Mab and Eira which ultimately led to the murder of Eira and her oldest daughter and the destruction of the Snow home, which left Gin and Bria orphans. Sadly, Gin and Bria believed the other had also perished in the fire that night and only now as adults are they seeking each other.

I enjoyed learning more about the connection between Mab Monroe and the Snow family, but I have to admit I'm a bit disappointed that Mab's hatred of Eira Snow was based largely on Mab's innate evilness and drive for absolute power with a dab of jealousy mixed in. Basically I wanted to understand why Mab is so mean, greedy and destructive and was disappointed to learn that she was just essentially born and raised that way.

Visit Jennifer Estep at her website http://jenniferestep.com for more information about her books, including the Elemental Assassin series and these short stories.

Do you read this series?

What's your favorite urban fantasy series that stars a female protagonist?
Posted by Christine at 9:00 PM