I am on a roll! Not only did I read my TBR Challenge book on time for today's round up post, but I even kept within this month's suggested book theme. February's theme is to choose a book that has made it's way onto your TBR pile upon the recommendation of a friend but has been languishing there far too long. I came up with three books and then polled some friends here on my blog to determine which one to read and Wicked Intentions won by a very slight margin. Now I know why it comes so highly recommended--it was a joy to read. Here are my thoughts: 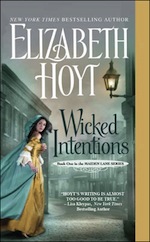 Lord Caire is searching for a killer in the London slums of St. Giles, with no success. He has no contacts in this area of London, doesn't know his way around and could really use a guide. Temperance Dews has been widowed for several years and dutifully works in the Home for Unfortunate Infants and Foundling Children that her family established, often going out in the dark of night to retrieve an abandoned baby. One night, Lord Caire follows her home and proposes a deal. Temperance would serve as Caire's guide in his nightly searches in exchange for money she so desperately needs to keep the home from shutting down. Temperance accepts Lord Caire's deal, adding the stipulation that he must also help her find a wealthy patron to permanently support the Foundling home. He agrees and soon these two are out in the dangerous alleys of St. Giles searching for a murderer and fighting their attraction for each other. As you can guess, they eventually do capture the killer as well as each other's hearts. The road to their happy ending, however, is a fascinating one and well worth the trip.

Wicked Intentions has several elements that kept me engaged in the story from the very first pages. One is the unique setting of the dark and depressing slums of St. Giles. After reading so many historical romance plots that focus on financial or social ruin within the ton, Wicked Intentions addresses very real social problems of the time--that is, how to survive in a world that's dangerous, unfair and full of obstacles that keep people in a community from thriving and or improving their lives. This aspect of the story felt very realistic and dramatic.

As for the plot, Lord Caire's search for a killer turned out to be quite a suspenseful mystery that kept me flipping the pages for more clues to the murder investigation. Not just who is this murderer but also, why is Lord Caire so obsessed with his search?

Of course, the growing attraction, genuine concern and love that grew between Lord Caire and Temperance was engaging as well. Caire and Temperance are such interesting characters--strong, confident and determined on the outside, but both harboring interesting secrets and vulnerable in their own ways. Learning a bit more about these two in every chapter was like unraveling a mystery in itself and to see them fall in love along the way was a joy to read.

Another thing that I really liked about this book was the familial ties within Temperance's family. Temperance is one of six children and with no parents still alive, these siblings are struggling to stay connected despite the various situations in their lives that keep them from truly being close. They do their best to keep the family going and look out for each other, but there's still some tension between them here and there that seemed realistic. This also sets the stage for future books with these characters as protagonists.

As for what didn't work for me in this book--it is very little, yet just enough to keep Wicked Intentions from a five star read. We learn almost straightaway that Lord Caire has a reputation for unusual sexual tendencies and later we find out that these unusual practices are a direct result of his aversion to touch. It is suggested that he has had this aversion to touch since he was a boy, but it's unclear if his issues are psychological or physiological. There are suggestions that it could be either or both and in fact, Temperance attempts to delve for some answers herself, but even then her speculations as to why his sexual practices are what they are still don't clarify the root of his issues. I suppose it can be argued that it doesn't really matter why he is the way he is as long as he and Temperance are able to touch each other freely, but I still wanted to understand it all and most of all, wanted Caire to understand himself so he could maybe work to alleviate his pain.

Wicked Intentions still kept me on the edge of my seat as Lord Caire and Temperance risked their lives every night to uncover the mystery of the gruesome murders in St. Giles and as their affection for each other grew into romantic love during this traumatic time. I'm intrigued by all of the secondary characters and will definitely be reading more stories in the Maiden Lane series.