As the Romantic Times Convention was drawing near last week, I started lamenting on the good times I'd be missing... meeting favorite authors and blogging friends and attending panel discussions. I was even considering driving 5 1/2 hours each way to go to to the author signing that took place last Saturday, but really couldn't justify the travel time and expense for such a short visit. So when I heard that Sherrilyn Kenyon was going to be at NY Comic Con in Manhattan promoting her Lords of Avalon series in comic form and the much anticipated novel, Acheron, I thought it would be a fun alternative to RT. I mentioned my idea, somewhat in passing, to my fellow romance reading friend, and Jersey girl, Katiebabs, and she was instantly enthusiastic about said NY Comic Con adventure. Kate told me that Melissa Marr, NYT and LA Times best selling author of Wicked Lovely was a last minute add on for a panel discussion at Comic Con, and that pretty much sealed the deal for us. If you haven't yet read Wicked Lovely, I recommend you do... its an awesome urban fantasy romance. I loved it.
For anyone who has never been to the Jacob Javitz Center in Manhattan, it is a huge convention center. Huge. Eleven thousand people roamed the floors on Saturday, attending discussion panels, sneak previews of upcoming movies, visiting vendor booths, publisher booths, artist galleries, demonstrations, gaming tables, costume contests, and so on. Overwhelmed upon our arrival, we decided to first stake out where Melissa's panel was going to be since she was a short notice addition, we had no information at all other than her panel was at 4:00 pm. The staff was friendly and considerate, but still not able to tell us which panel Melissa was on. So we sat in on a panel discussion on NYC through its authors. Then we ventured up two levels to the program floor. So many people, so many booths, so little time. Being the voracious readers we are, we decided to hit a few publisher booths.
Our first stop was the Penguin booth where we bumped into (almost literally) Anton Strout, author of recently released urban fantasy novel, Dead to Me. He is also a member of the League of Reluctant Adults site and the Fangs, Fur & Fey LiveJournal community. He is such a sweet guy. Friendly, witty and laid back, Kate and I had a fun time chatting with him. Anton had had a signing at Comic Con the day before and sold all the books he had there (way to go, Anton!), so we got a postcard signed instead.
We finally found Melissa Marr's panel, which was a discussion on today's voices in graphic novels and got a few minutes to chat with Melissa afterward. We asked a few quick questions about her writing, she got to sign my copy of Wicked Lovely that I brought along, and she gave us some beautiful temporary tattoos that Melissa's own personal tattoo artist designed, inspired by the art for Wicked Lovely and Ink Exchange.

Ink Exchange is Melissa Marr's next novel, scheduled for release on April 29, 2008. Melissa was so warm and humbled that we sought her out--I really wish we had more time to talk with her. She just had this aura about her that made me feel comfortable enough to want to sit and chat with her over coffee, tea, or something stronger! Maybe next time. Melissa even gave us the heads up about Ink Exchange being available at the Harper booth so Kate and I could get a copy. I'll be reading it this week!
Supercool sidenote: While getting the link to Melissa's site and blog .... I noticed Melissa mentions meeting Kate and me at Comic Con in her blog post today! Yay!!! :)

Kate and I make it back to Sherrilyn Kenyon's booth where we got free books and other neat promo stuff, including an exclusive excerpt to Ash's story, and a handful of intriguing quotes from Acheron, scheduled for release on August 8, 2008. Here's one of my favorites: (hmm... I hope I'm allowed to post this... :s )
"He's willing to end the world for you. You should be impressed. I am." ~Nick Gautier
Sherrilyn said she'll be back in Manhattan in August for Ash's book tour. 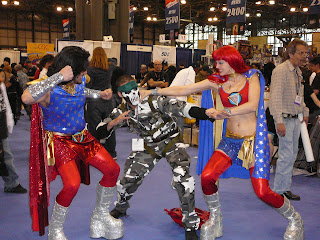 I'm sure you all can imagine that New York City is a prime location for people watching. Well, go to a comic convention in New York City and it is people watching haven. At first, I tried not to stare, ogle and gawk. Then I woke up and realized these people dressed like they did because they want to express their affection for their favorite characters and they absolutely revel in the attention. So I eventually got over my concerns about not staring, kept my camera out and started snapping pictures. As you can see, fans really get into their roles. They even have poses and actions rehearsed!
Of course, I couldn't help but stage some pics of Kate groping Superman and Batman. I mean... its important for a girl to weigh her options, right? (pun intended)